Maripí Telerín pronounced (Ma-Ree-P) Telerín is the middle female child of the siblings, Maripí is more of the "sweet" and dainty type, she loves dancing ballet and is sometimes a competitive to Cleo as a rival more than the other siblings, but Maripí can sometimes get grumpy with the other siblings as well.

In the middle of so much chaos, Maripí is very organized, clean, above all, theatrical to the core. She loves being the center of attention. Maripí is somewhat a poop-tongued beauty queen and a bit bossy. She has a bad temper sometimes. When she wants something, she will use her arsenal to get it. She is a little drama queen! But the truth is she is very talented when it comes to the arts. She is such an artist. Theatre, dance, and sing... Well she sings normally. Okay actually she sings really goodly! She is sassy. But sometimes she’s nice to Cuquín.

Maripì has blonde hair with bangs, a ponytail held up by a pink ribbon and wears a pink headband, a light pink short-sleeved sweater with fuchsia butterflies, a pink bracelet on her left wrist, a purple belt with a flower-shaped-buckle, a pink skirt, and purple boots with lavender butterflies on them and matching soles.

Maripí’s relationship with Cleo isn’t much well known. Sometimes Maripí can be mean to Cleo. But most of the time they make up and get along.

Maripí is sweet to Cuquín. They both like each other very much. Maripí loves Cuquín a lot. But sometimes when he works her last nerve, Maripí would take away what Cuquìn is using. She has a rivalry with Cuquín sometimes.

Maripí often gets mean with Pelusin sometimes. She often ceases arguments between Pelusin. They both have a rivalry with each other most of the time. They don’t make the best friends. But they sometimes get along.

Maripì seems to like Colitas. Mostly they don’t bicker and fight. And they seem to be into each other.

Tete seems nice to Maripì. They are mostly sweet and fun. 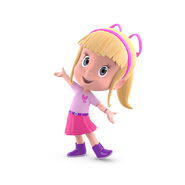 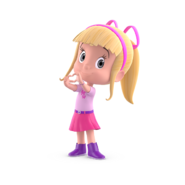 Maripì making a Heart with her Fingers 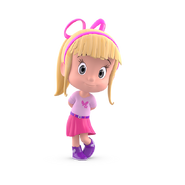 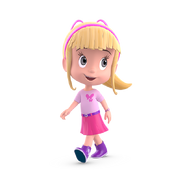 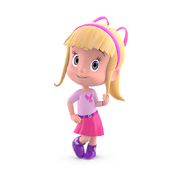 Maripi in her School Play Dress

Maripi in soccer clothes
Add a photo to this gallery
Retrieved from "https://cleo.fandom.com/wiki/Marip%C3%AD_Telerin?oldid=1389"
Community content is available under CC-BY-SA unless otherwise noted.